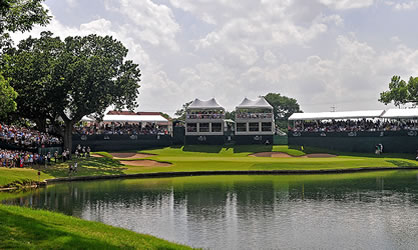 The Charles Schwab Challenge (formerly known as the Fort Worth Invitational, Dean & Deluca Invitational and Crowne Plaza Invitational) is played annually in Fort Worth, Texas at Colonial Country Club.

The tournament was founded in 1946 as the Colonial National Invitation and honours the history of golf by using an official Scottish tartan jacket for its champions. Colonial has a Wall of Champions on the first tee engraved with the name and score of each champion.

The tournament is unofficially associated with Ben Hogan and is commonly referred to as Hogan’s Alley. The long-time Fort Worth resident won the tournament five times.

The Charles Schwab Challenge at Colonial has “invitational” status given by the PGA Tour and consequently has a reduced field of approximately 120 players.

Colonial has a unique PGA Tour tradition known as the Champion’s Choice invitation. Each year, former champions select two deserving young players, who otherwise would be ineligible, to compete in the tournament.

Pros who made their first appearance at the Charles Schwab Challenge as a Champion’s Choice include Al Geiberger, Tom Weiskopf, Craig Stadler, Curtis Strange, Mark O’Meara, Paul Azinger and Davis Love III. In 2003 Annika Sörenstam played in the tournament missing the cut after rounds of 71 and 74.

The course at Colonial Country Club was designed by John Bredemus and Perry Maxwell. It is a standard Par 70 (35-35) measuring 7,200+ yards. The three hole stretch 3-5 is known as the “Horrible Horseshoe“. ‘Horseshoe’ because the three holes swing around in a ‘U’ shape and ‘Horrible’ because they are not easy.

Colonial is all about accuracy, both off the tee and from the fairway. It is a tight tree-lined layout with lots of dog-legs and water is in play on six holes. Players need to avoid the fairway bunkers and find the right portion of the fairways to attack the small greens.

The 2020 champion,, Daniel Berger, prevailed in a playoff to win the 2020 Charles Schwab Challenge for his third PGA Tour victory. He closed with a final round -4 (66), which included a birdie on the final hole, to force a playoff with Collin Morikawa.

Both players finished the tournament on a score of -15 (265) one shot clear of a group of four players of Justin Rose, Bryson DeChambeau, Jason Kokrak and Xander Schauffele. Berger got up-and-down for par on the first playoff hole while Morikawa missed his par attempt from two feet.

“There was so many times today where I could have given it up or let the pressure get to me, but I hung in there and I played practically some of the best golf I’ve played the last six years.”

Berger’s iron-play on approach and putting were key to the victory. He finished T11 in Strokes Gained Approach-The-Green and 12th in Strokes Gained Putting, both combining for over 80% of his overall strokes gained for the week. Other stats include T33 for Driving Accuracy, 44th for Driving Distance, T5 for GIR and 10th for Putts per GIR.

In 2019, Kevin Na captured the Charles Schwab Challenge on a final score -13 (267) for his third victory on Tour. The South Korean-born American closed with -4 (66) for a four shot victory over Tony Finau.

A bogey free second round 62 laid the foundation for his victory. He followed with rounds of 69 and 66 squaring only 2 bogeys for both rounds.

“They say this is a golf course that I’ve had the most leads in a tournament, so it tells you how much I like this place and how well I’ve played here.”

The 2018 champion, Justin Rose emerged victorious finishing three strokes ahead of his nearest rival Brooks Koepka. He carded a final round -6 (64) to finish on a total -20 (260). The Englishman’s victory at Colonial was his ninth PGA Tour success.

Ball striking was the key to Rose’s win finishing the week 1st in the Strokes Gained Tee-To-Green (15.820 strokes) category. The majority of his gain on the field average came from his approach play. He topped the field in Strokes Gained Approach-The-Green which yielded an impressive 10.242 strokes. Other stats for the tournament include T6 for Driving Accuracy, T17 for Driving Distance, 1st in GIR and 21st for Strokes Gained Putting.

Kisner has had 6 runner up finishes in his career, including 4 in playoffs.

“I’ve been in this position a ton, and one thing I always take away is you just got to keep making birdies and basically look up when you can’t make any more.”

A strong short game and putter powered Kisner to victory. He finished the week 2nd in Strokes Gained Around-The-Green and 3rd in Strokes Gained Putting. This gave him a combined gain of 9.818 strokes on the field average for the week. Other key stats include T1 for Driving Accuracy, T39 for Driving Distance, 2nd in GIR and T28 for Putts per GIR

The following table details the Average Strokes Gained in each of the key strokes gained categories for the past five champions of the Charles Schwab Challenge.

Graphing the above Average Strokes Gained gives a visual check on the likely key areas required for success at this week’s Charles Schwab Challenge.

Colonial is a true shot-maker’s golf course requiring players to shape the ball off the tee. It demands precision and rewards good ball-strikers. Good scrambling is important and the Texas winds form part of the course’s defense

Jordan Spieth 14/1 (E/W) – a past champion of the Charles Schwab Challenge, winning here in 2016. His results since his victory read an impressive T2-T32-T8-T10-2. A victory in the RBC Heritage and a solo 2nd in the AT&T Byron Nelson are enough to put the Texas native top of the pile in this week’s Current Form table. Statistically balanced, the consummate pro places 4th in this week’s Stats Analysis. Only player in this week’s field to feature inside the Top 10 for each of the performance indicators of Event Form, Current Form and Stats Analysis. Standout pick.

Davis Riley 40/1 (E/W) – fist look at Colonial Country Club for the 25 year old from Mississippi. An eye-catching T13 in last week’s PGA Championship was preceded with a T9 in the AT&T Byron Nelson and a solo 5th in the Mexico Open. His solid season is reflected in his stats, placing just inside the Top 20 in this week’s Stats Analysis. He is also 10th on Tour for Birdie Average. Willing to overlook absence of tournament experience based on compelling Current Form and stats. Good each way value.