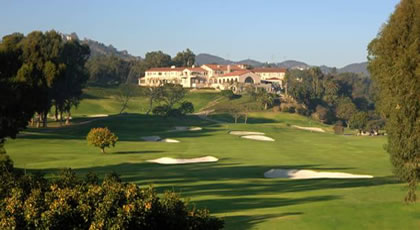 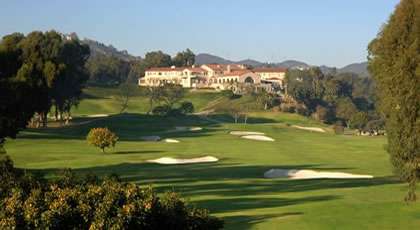 The Genesis Invitational, formerly known as the Northern Trust Open, was first played in 1926 and is played annually in Pacific Palisades, California. The tournament has been contested at the Riviera Country Club on a near-continuous basis since 1973.

Designed by golf course architect George C. Thomas Jr., Riviera has hosted the US Open in 1948 and the PGA Championship in 1983 and 1995. It also hosted the US Senior Open in 1998. Noted for its spectacular beauty and challenging design, Riviera Country Club is recognised as one of the best courses on the PGA Tour.

Riviera is a Par 71 (35-36) that measures 7,349 yards. Finding the fairways and even the right part of the fairways is key in order to attack pins and set up birdie opportunities.

The fairways and rough consist of a tough strain of grass called Kikuya which makes for perfect lies on the fairway, sitting the ball up. However in the rough the grass grabs and covers the ball minimising the ability to control shots.

“Riviera is definitely one of the greatest, no-nonsense golf courses in the world. It requires a player to play every club in his bag and every shot in his game“

Greens in Regulation is the key attribute this week. With a premium on playing from the short stuff, distance gives way to accuracy from the tee. Experienced accurate ball strikers tend to do best with an efficient game tee-to-cup.

Riviera is no bargain for scrambling so an A-game is required in getting the ball up and down around the small green complexes.

As a 16-year-old amateur, Tiger Woods made his first PGA Tour start in 1992 at Riviera, competing on a sponsor’s exemption.

Last year, Max Homa carded a final round -5 (66) to finish on -12 (272) ft or the tournament and tied alongside Tony Finau. Homa secured the 2021 Genesis Invitational at the second playoff hole for his first win since the 2019 Wells Fargo Championship.

“I don’t know if I could ever do anything cooler in golf than this. Tiger Woods is handing us a trophy, that’s a pretty crazy thought. We grew up idolizing him, idolizing Riviera Country Club, idolizing the golf tournament.”

All aspects of the local-boy’s game were on point. He finished inside the Top 10 for SG:Off-The-Tee, SG:Around-The-Green, SG:Tee-To-Green and SG:Putting. Two-thirds of his overall strokes gained came tee-to-green.

He finished 7th in Strokes Gained Putting which equated to a gain of 4.6 strokes for the tournament. Other stats for the week include T11 for Driving Accuracy, 92nd for Driving Distance, T10 for GIR and 3rd for Putts per GIR.

In 2020, Adam Scott secured his 14th PGA Tour title by winning the Genesis Invitational. He carded a final round -1 (70) for a -11 (273) total to win by two strokes from Sung Kang, Scott Brown and Matt Kuchar. The victory came 15 years after Scott won a playoff at Riviera that didn’t count as official because rain shortened the tournament to 36 holes.

“This is incredibly satisfying, it’s a place I’ve loved for many years and played well at a lot of times and to get an official victory here among one of the best fields we’ll have this year feels very, very good”

Tee-to-green is where the magic happened for the ultra-talented Aussie. He finished the week 3rd in Strokes Gained Tee-To-Green which translated to a gain of just over 10 strokes on the field average. In particular, his iron play on approach was dialed-in finishing the week 3rd in the Strokes Gained Approach-The-Green.

Other stats for the week include T63 for Driving Accuracy, 15th for Driving Distance, 1st for GIR and 27th in Strokes Gained Putting.

In 2019, J.B. Holmes came from 4 shots back of Justin Thomas in the final round to win the Genesis Invitational. Holmes carded a final round -1 (70) to edge out JT by one stroke. It was his fifth PGA Tour win and first since the 2015 Shell Houston Open. Putting woes saw JT shoot a +4 (75) to open the door for Holmes to walk through.

“I knew it was going to be very difficult to shoot a low score, I needed some help from Justin”

Suspensions to play in earlier rounds due to inclement weather meant that Holmes and Thomas had to play 33 holes on the final day. They had just 30 minutes separating the end of their third round with the start of their final 18 holes.

Holmes finished the week first in SG:Putting, gaining 8.170 strokes on the field average for the week. This amounted to almost 55% of his overall strokes gained. He also finished 6th in the SG:Approach-The-Green (5.395 strokes) for the tournament. Other stats include T59 for Driving Accuracy, 41st for Driving Distance, T2 for GIR and 6th for Putts per GIR

Almost 80% of Bubba’s strokes gained on the field average came tee-to-green. The left-hander finished the week T27 for Driving Accuracy, T21 for Driving Distance, T7 for GIR and 13th for Putts per GIR

The 2017 champion, Dustin Johnson, captured the Genesis Open with a five shot victory that propelled him to number one in the Official World Golf Ranking. His impressive play from the tee, in particular his length, coupled with a sure putting stroke were key to getting the job done.

DJ finished the week 1st in Strokes Gained Off-The-Tee and 3rd in Stokes Gained Putting giving a combined 12.57 stroke gain on the field average for the week. Other stats included T45 for Driving Accuracy, 1st for Driving Distance, 1st for GIR and T16 for Putts per GIR.

In 2016, Bubba Watson, was two shots behind with four holes to play in the final round. Birdies on 16 & 17 was enough to capture his second title at Riviera. Bubba finished the week T16 for Driving Distance, T50 in Driving Accuracy and T7 for GIR. When he won in 2014 he was 1st, T8 and T3 for the same stats respectively.

2015 saw seven players having at least a share of the lead during the final round. James Hahn got up-and-down from behind the 18th green in regulation play to save par for a -2(69) and earn a place in a playoff with Dustin Johnson and Paul Casey. He holed a 25-foot birdie putt at the third extra hole to capture his first PGA Tour title. Hahn won with a negative Strokes Gained Putting ranking 50th for the stat.

The Event Form, Current Form and Stats Analysis tables will all be up dated in the week preceding the tournament when the field is finalised for the 2022 Genesis Invitational.