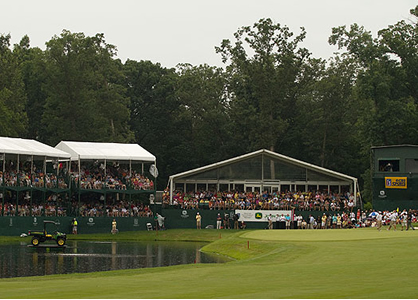 The John Deere Classic is played at TPC Deere Run in the Quad Cities community of Silvis, Illinois. The tournament began as the Quad Cities Open in 1971 and was a “satellite event” on the PGA Tour. It became an official Tour event in 1972 and John Deere have been the title sponsors since 1999.

Since 2000 the event has been played at TPC Deere Run which was designed as a stadium course by DA Weibring.

In 2005 and 2006 the tournament generated much attention due to a sponsor’s exemption given to Michelle Wie. The 2013 edition of the John Deere Classic saw Jordan Spieth emerge victorious two weeks before his 20th birthday to become the first teenager to win on the PGA Tour since 1931.

TPC Deere Run is a Par 71 that stretches to 7,200+ yards from the championship tees. The course continually ranks among the easiest Par 71s on Tour and annually yields high percentages for both fairways hit and greens in regulation.

At TPC Deere Run, how far and in which direction you hit the ball off the tee is basically immaterial. This week is all about aggressive play, accurate short irons and good putting.

In 2018, Michael Kim set a tournament record shooting a total -27 (257) to finish eight strokes clear of his nearest rivals.

John Deere Classic Past Champions (since 2000)

There will be three tee-times up for grabs at the 150th British Open for the leading three players (not otherwise exempt) who finish in the Top 10 and ties at this year’s John Deere Classic.

The John Deere Classic is a birdie-fest, plain and simple. Go low or go home

The Event Form, Current Form and Stats Analysis tables will all be up dated in the week preceding the tournament when the field is finalized for the 2022 John Deere Classic.