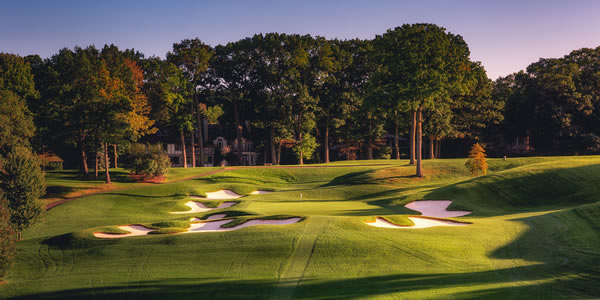 The RBC Canadian Open was first played in 1904 by the Royal Canadian Golf Association (RCGA). It is the third oldest continuously running tournament on the PGA Tour after the British Open Championship and the US Open.

The Canadian Open hasn’t been played since 2019 due to the Coronavirus pandemic. That year, it was played at Hamilton Golf & Country Club with Rory McIlroy emerging victorious, seven strokes clear of his nearest rivals.

In 1946 the name of the country club was changed from The Royal York Golf Club to St. George’s Golf and Country Club. The layout will play as a Par 70 that can stretch to 7,014 yards from the back tees.

The course is a classic design with tree-lined fairways, elevation changes and smaller than average greens. The challenge this week looks to rest with the Par 3’s.

The layout has five Par 3’s with four playing at just over 200+ yards. The course has three Par 5’s which are modest in length by Tour standards. The Par 4’s range in length from 370 – 486 yards.

The layout and design of St George’s features superb routing with holes that keep the layout challenging despite its lack of length. This week looks like accuracy will trump distance, a fact highlighted by the players who finished in the Top 20 when last played at St Georges.

The RBC Canadian Open is a hard one to assess due to course rotation and it’s slot before the US Open. With unfamiliar greens serving as targets, Strokes Gained Tee-To-Green will yet again be a key consideration. Those in tune with distance and accuracy who sink their fair share of putts should thrive.

This is one of those weeks to approach with caution.

Shane Lowry 18/1 (E/W) – the Irishman has good history at the RBC Canadian Open with a T12 in 2018 when played at Gen Abbey and a T2 in 2019 at Hamilton Golf Club. Enjoying a very solid season with three Top 10’s among seven Top 25’s from twelve starts. Statistically balanced, the 35-year old features inside the Top 10 in this week’s Stats Analysis. Currently 11th on Tour for Strokes Gained Approach and 6th for Scoring Average. Among the elite in the field, he ticks a lot of boxes to make some noise around St Georges.

Tony Finau 25/1 (E/W) – a regular at the RBC Canadian Open, his best finish in the recent past is a T5 in 2017 when played at Glen Abbey. Landed his first Top 10 of the season at the recent Mexico Open, he followed with a battling T30 in the PGA Championship and a T4 in his last outing at the Charles Schwab Challenge. Despite weak Scrambling stats, the Utah native still places inside the Top 20 in this week’s Stats Analysis, While most players at the top end of the market will have an eye on next week’s US Open, he is probably hungrier than most for a return to the winner’s circle – might just be enough to give him an edge. Ticks a lot of boxes.