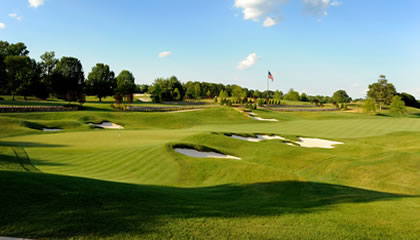 Traditionally the tournament is played at Quail Hollow in Charlotte, North Carolina and in 2009 and 2010 the event was known as the Quail Hollow Championship.

However, as Quail Hollow is hosting this year’s Presidents Cup in September, TPC Potomac at Avenel Farm, Maryland is stepping up to the plate to host the 2022 Wells Fargo Championship.

TPC Potomac at Avenel Farm opened for play in 1986. In 1987 the Kemper Open (which later became known as the FBR Capital Open and Booz Allen Classic) moved from Congressional to TPC Potomac. The tournament was held for 19 of the next 20 years at TPC Potomac.

Notable winners at TPC Potomac include Lee Jansen (1995), Adam Scott (2004) and Steve Stricker who won his first PGA Tour title here in 1996. Ben Curtis won the final Booz Allen Classic at TPC Potomac in 2006 on a score of -20.

From the off the course was plagued by years of flooding and drainage problems. There was also issues which affected the greens producing less than satisfactory tournament conditions. This prompted a multi-million dollar renovation of the course by the PGA Tour in 2008.

The layout underwent a significant renovation to bring the course up to PGA Tour standards. The course was virtually re-built from scratch. Greens and fairways were completely rebuilt and all holes were regraded to create more natural contours. There was also a reduction in fairway widths. There was a complete re-design of holes 10, 11 and 13. The renovation also included the re-building of all bunkers and the installation of a state-of-the-art irrigation system.

The course was renamed TPC Potomac at Avenel Farm at the time of the renovation and the new Par 70 design was extended to 7,139 yards from the back pegs.

Following the renovation project, TPC Potomac hosted the 2010 Constellation Senior PLAYERS Championship and the Web.com Tour’s Mid-Atlantic Championship in 2012 and 2013. The average winning scores for these tournaments was -8 which is a marked difference to the winning score of Ben Curtis (-20) in 2006. The re-design produced a tight and tricky layout that emphasizes the importance of good ball-striking.

Mark O’Meara who won the 2010 Senior Players Championship, was the only player to shoot under par each of the four days. He had this to say about TPC Potomac;

“I think it’s important to enjoy a golf course; and this golf course, with the renovation, is tremendous.”

In the 2017 edition of the Quicken Loans National played at TPC Potomac, Kyle Stanley emerged victorious for his second PGA Tour victory. It was a jam packed leader board on the final day with seven players holding at least a share of the lead.

It took a playoff between Stanley and Charles Howell III to settle matters after both finished -7 (273) for the tournament. A par at the first playoff hole was enough for Stanley to get the job done.

Stanley finished with a negative Strokes Gained Putting which highlights the fact that you don’t necessarily need a red-hot putter to get the job done this week. Other stats for the tournament include T3 for Driving Accuracy, 29th for Driving Distance, 1st for GIR and 26th in Putts per GIR.

Francesco Molinari won the 2018 Quicken Loans National at TPC Potomac for his first PGA Tour victory. He tied the course record of -8 (62) in the final round to finish on -21 (259) for the week. His nearest rival, Ryan Armour, was a whopping eight strokes back on -13 with Sung-hoon Kang a further shot back. Tiger Woods and Abraham Ancer finished in a tie for fourth.

Like Stanley the year previous, Molinari put on a ball-striking exhibition. The Italian topped the pile for the week in Strokes Gained Putting gaining a jaw-dropping 17.302 strokes against the field average for the week. This equated to almost 85% of his overall strokes gained for the week. Other stats include 4th for Driving Accuracy, 32nd for Driving Distance, 1st for GIR and T17 in Putts per GIR.

Please check back on Tuesday 2nd May for the PGAgolfbets’ Wells Fargo Championship tips & predictions 2022 from TPC Potomac at Avenel Farm, in Potomac, Maryland.

The Event Form, Current Form and Stats Analysis tables will all be up dated in the week preceding the tournament when the field is finalized for the 2022 Wells Fargo Championship.